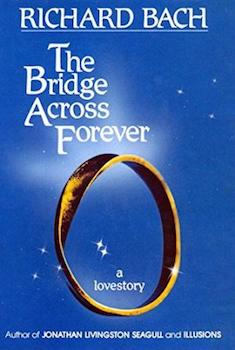 For those of you who enjoyed the best-seller Jonathan Livingston Seagull and have a taste for a real-life love story, here’s another one by the American writer Richard Bach.

Just like his earlier books, ‘The bridge across forever’ also espouses his philosophy that our physical limits are only apparent.

Mortality is an illusion and we must learn to fly above the clouds and the shadows of this world to see the truth shining down upon us.

This theme is recurrent in all of Bach’s books and his writing style has a straightforward and clear approach to a perennial philosophy. This time, however, we see his ideas through the filter of his real-life love story with the once known girl of his dreams, Leslie Parish.

Richard Bach is noted for his love of flying and ‘The bridge across forever’ doesn’t stray from the theme of rising above the clouds in love. In it he recounts his initial meetings with Leslie and their eventual marriage in 1977 but always returns to the transcendent allusions of timelessness and illusion. The two lovers met serendipitously during the making of the Jonathan Livingston Seagull movie. This is recounted in a scene where Bach was extremely angry over the mishandling of his vision for the Jonathan film.

Leslie becomes a major element in this subsequent book of which he gives firsthand accounts of the inspiration for writing it and how the two of them eventually became husband and wife. This love affair also comes to a worldly end but is recounted allegorically so as to maintain the underlying theme of timeless love and our own immortality.

As in his other books, we learn that our true nature is not bound by space or time and we are expressions of the non-dualistic ‘One’. This word actually became the eventual title of another book by Bach in later years One.

As in his other books, Richard Bach paints a clear picture of his philosophy of love; that we are not truly born nor do we ever truly die. Love transcends concepts of marriage, physicality and time. We only enter this world of appearances for fun and for learning.

We share experiences with those we care for and we explore our souls purpose so that we can learn how to love again and again. Letting go of our limitations through forgiveness may also be the final lesson that can be obtained in this story. As even this wonderful love story comes to an end, the true meaning behind ‘The bridge across forever’ is that all love is timeless and leads us to something greater than what we already are.

The bridge across forever by Richard Bach