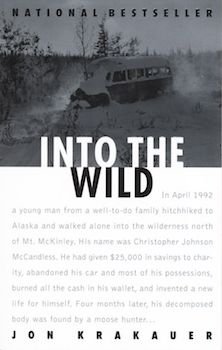 Here’s a book that may look like a boring mountain hiking tale or a story about “nature” but take a second look.

‘Into the wild’ by Jon Krakauer is a bestselling non-fiction book about the true life adventures of Christopher McCandless who did the unimaginable.

The book begins with the true life discovery of McCandless’s body inside an abandoned bus out in the middle of the Alaskan wilderness. McCandless died on the adventure of a lifetime but Alexander Supertramp lives on as the story retraces his travels during the two years he was missing and tries to make sense of the mystery.

The author, Jon Krakauer, interprets McCandless’ strange death to his intense personality and the influence of the writings of Leo Tolstoy, Henry David Thoreau, and his favourite writer, Jack London.

He also explores the similarities between McCandless’ experiences and motivations of many young college students. As the evidence unravels, we learn that McCandless survived for approximately 112 days in the Alaskan wilderness, foraging for edible roots and berries and shooting an assortment of game including a moose. He also kept a journal which is absolutely extraordinary.

Eventually, in his journeys, McCandless settled into an abandoned bus in the Alaskan wilderness. Toward the end, after apparently remaining healthy for more than three months, McCandless wrote a journal entry reporting extreme weakness, neurological symptoms and loss of coordination. The exact cause of the young man’s death remains open to question but is extremely interesting and strangely inspiring.

The book has since been adapted into a 2007 movie of the same name and is directed by Sean Penn who also recognized the depth of this amazing tale. Eddie Vedder, the lead singer of Pearl Jam, also contributed several solo efforts to the soundtrack.

The author of the book spent three years carrying out the background research work for this biography because McCandless went missing after several months and very little was known about what happened to him.

As you read the biography, you begin to learn about an individual who is just like many college kids his age; seeking after something greater but not knowing quite where to find it. Check out ‘Into the wild’ to peer deeper into the human psyche than you may have ever peered before. This is a book that will certainly keep you thinking about the breadth of the human spirit.

Into the wild by Jon Krakauer