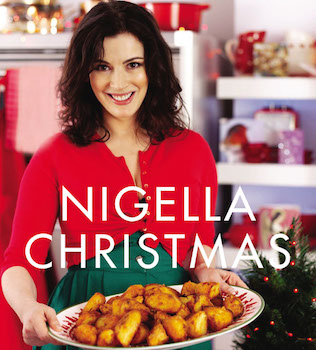 If there is one celebrity chef that can smile sweetly and show cleavage for a Christmas cookbook cover, it’s Nigella Lawson. No one else would be able to pull off that sexy-glutton look while lying on a couch wearing plush reindeer antlers.

Lawson’s latest cookbook is as sumptuous as the festive season itself and as weighty as we would get if we were to try out all the recipes on offer. These include not just the usual Christmas ham and pud, but also a number of deliciously colourful alternatives.

The photos speak voluptuous volumes to get readers into Christmas mood. Lawson loves colour coordination – food, as well as clothes in the photos, are, if at all possible, red, white and green, just as it should be. The photos show tables groaning under the weight of goose and turkey, sausages, golden goblets, pumpkins and cakes, they sparkle and glitter and glow and virtually jump out of the book.

Equally eloquent is the text. In true Lawson fashion, she talks about the rich, red, sweet and viscous maiden-aunt’s tipple, a delicate, but the resonant scent, the damp bounciness of a cake and stipulates a capacious 1.7-litre basin and cannot extol the utter gloriousness of this pud too much. I guess she can’t help herself when she uses expressions like unbulkily pliable, blissfully reassuring peaks and recipes that work glowingly well. I agree. From cocktails to cookies – they sure do work well and include an enormous variety of foods and drinks.

Start off with some drinks and canapes (Party Parma Ham Bundles my favourite), have a lovely afternoon tea with Christmas Rocky Road and Eggnog Syllabub. Go on – I dare you to eat some more: Christmas Ham, Choc Chip Chili, Boozy British Trifle or – a nod to us in the Southern Hemisphere – a Prodigious Pavlova dripping with a creamy passionfruit pulp, lychees and red, red, red raspberry sauce. Feeling full? Surely you can squeeze in a tiny bowl of Boston Baked Beans, a slice of Effortless Home-Cured Pork, a Party Poussin or two and thimble-sized Chestnut Chocolate Pot. And now – no, not sinking into the folds of a sofa, but The Main Event with Spiced and Superjuicy Roast Turkey with Allspice Gravy, Cranberry Sauce, Bacon-Wrapped Chipolatas, Maple-Roast Parsnips and the Ultimate Christmas Pudding. Had enough? Well, there are heaps more but I realise you need to lie down now.

For those who have ever asked: How do I do Christmas for a crowd and make it into the New Year unscathed, Lawson has added a timeline for a Christmas lunch for 10-16 people, preparing some things on Christmas Eve and starting to cook at 10 am on Christmas day, serving lunch at 2.30pm. If you’re a serious Christmas lunch provider you might find this section very useful.

The book also contains a lot of smart tips and unusual recipes, for example, Spoonbread and the luxurious Tiramisu Layer Cake.

To wrap it all up, a section at the end of the book offers Edible Presents and Party Preserves. It contains gems, such as Winterspiced Vodka, Beetroot and Ginger Chutney, Chili Jam and the very cute Christmas Puddini Bonbons.

It’s hard to find fault with the selection of recipes that cater for meat eaters and vegetarians alike. And if you share Lawson’s love for sparkly kitsch, you’ll love this book for its over-the-top Christmassy presentation (ingredients are printed in red, recipes in Christmas-tree green).

My favourite part of the book, however, is the introduction. Lawson takes quite a few pages to explain her heathen roots and pagan beliefs, which I share. She says: “. . . truth is, the Christmas we celebrate in our kitchens is not the Christmas that is celebrated in a church. Yes, of course, they coincide, and, for many, the latter corroborates and gives meaning to the former, but the Christmas feasting, the Christmas lights, the carousing, and the gift-giving, these come from much further back than the birth of Christianity. Indeed, one of the great geniuses of Christianity has been its sage piggybacking of pre-existing feasts and festivals. If you want to encourage the heathens to adopt your faith, how very sensible to reassure them that their fun is not going to be taken away.” Let’s thank all the ones who celebrated this festival before us for passing on a tradition we can share with friends and family.