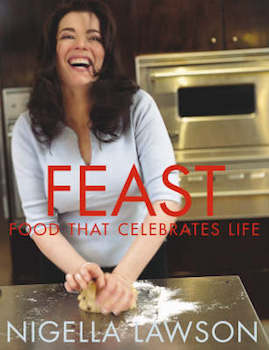 Food and eating are not just about keeping us alive – a fact nobody can explain better than Nigella Lawson.

Jamie Oliver is passionate about best ingredients, Gordon Ramsay goes nuts if food is not cooked and presented to perfection – Lawson is all about the people who eat.

On every single page Feast explains that “how we eat and what we eat lies at the heart of who we are – as individuals, families, communities.” This understanding of people and their relationships is Lawson’s strength. She believes that what we eat is just as important as who we eat with. The recipes, collected for all sorts of occasions, are listed to aid our efforts to make the party happen.

The word party is perhaps a bit too casual for some of the gatherings Lawson suggests menus for. But I agree with her that even the funeral feast is part of celebrating life. In many cultures an abundance of food shows respect for and honours the life of the person who died, as well as sustaining the living.

The importance of what we eat became painfully clear when I read about what some men on death row had ordered for their last meals. Lawson’s notes about the debatable taste and value of such a list are worth a thought. But she didn’t just dwell on the sombre side of life, most of the chapters are dedicated to joyful occasions.

From religious feasts, such as Easter and Passover to the much older Halloween and Thanksgiving, from the comparatively formal, such as a wedding to a casual kiddie feast – Lawson covers all occasions with a multitude of recipes. She even encourages us to make up one if none is conveniently coming up in the annual calendar.

Each chapter comes with a charming, and rather personal, introduction, which reads like a food memoir. Many food writers try this chitchat around their recipes, but among the youngish food celebrities, Lawson is the most eloquent, in an emotional, friendly and rather funny way. Being a sensual foodie, as well as a good writer, she “talks” you through her recipes without waffling or boring you to tears.

The hardcover version of Feast is a weighty book, and at $80 not a cheap one. But if you treat it as a reference book, to which you can come back to, perhaps, for the rest of your life, its more than 300 recipes seem good value for money.

The recipes give exact instructions and measurements, but also have Lawson’s characteristic notes for those who like the handful-of-this approach. Every recipe is achievable in the home kitchen and all are made from ingredients that are easy to get.

Most of the food for the photos looks charmingly crooked as if Lawson herself has cooked or baked it, and indeed, in some of the pictures, she can be seen pouring the crosses on hot cross buns or happily kneading some dough.

The book is a feast itself and I’m convinced I shall enjoy its stories as well as its recipes for a long time to come. I am what I eat – no other cookbook has made the inevitability of the fact quite as clear as Nigella Lawson’s Feast.