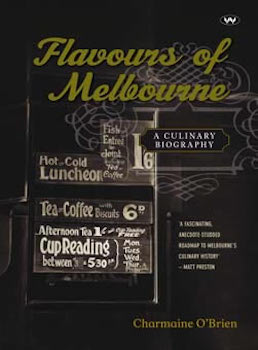 Chef and food writer O’Brien has put together a culinary portrait of her hometown Melbourne, the food capital of our Aussie neighbours.

Flavours of Melbourne eats its way through the city’s history, starting at the pantry of Australia’s indigenous peoples, munching away at the food of the early settlers, feeding on gold rush and the temperance movement, gleaning recipes of immigrants and finally gnawing away on the fusion food of modern Melbourne.

The book is full of anecdotes, reads well and is not just an enjoyable walk through time, but also a resource for anyone interested in recipes from yesteryear. You’ll find some with wonderful names like Walnut Divinity Fudge, Empanada, Plum Duff, Devilled Bones, Brandy Smasher, Brown Betty, Cherry Balls en Surprise and Schnapper a la Kraft. There are also quite a few puddings that sound promising, such as Roley Poley Jam Pudding, Vermicelli Pudding, Banana Trifle and Pineapple Pudding.

I especially loved the recipes of both post-WW eras, when food shortages forced the invention of a few delicious concoctions, namely a grilled open sandwich with apple and bacon fat, and the aptly-named Austerity Pudding.

I’m sure the list of recommended restaurants, bistros, museums, bars, hotels and cafes will make my next visit to Melbourne a journey of culinary discovery. I’ll definitely read the book again before I fly over.

Flavours of Melbourne: A culinary biography by Charmaine O’Brien