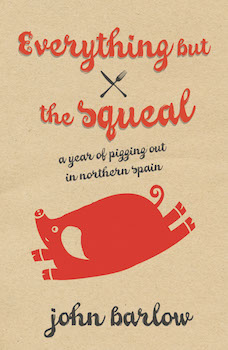 Much has been written about some foods – almost too much: Jack ate locusts at the back of Timbuktu, Jill had an unforgettable donkey steak in the Andes and Tom, Dick and Harry stuffed themselves with deep-fried eyeballs in Hokitika.

In contrast, John Barlow likes the common porker and has written about it in a way that had me in squeals of laughter. He is a teacher from the UK who lives with his wife and son in Spain. I’m sure the marriage to his Galician, almost vegetarian wife has a lot to do with his witty insights into the soul of the Galician people.

The northern Spanish province is a meat lover’s paradise, that’s why (and for a whole lot of other reasons) Barlow embarks on a porco-graphical tour of the region. He wants to eat every part of the pig in as many places as possible. It’s all about what goes into the pot, he says and tucks into the national pork-laden dish of cocido, which he considers a chance of indulging in one of the Seven Cardinal Sins without anyone looking disapprovingly. For that reason alone, he says, you really should try stuffing yourself with pork until you almost pass out.

Along with Galician history and culture Barlow lets us partake in local folklore, festivities and, of course, local food. There are a few recipes, too, but most of the cooking (and eating) methods will come to you naturally after trotting through this pork belly-laughter filled stew of a book. If you love your pork – go read and enjoy Everything But The Squeal.

Everything but the squeal: A year of pigging out in northern Spain by John Barlow.