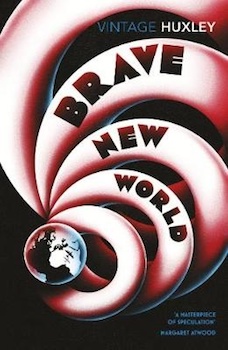 Only two decades ago, Huxley’s ‘Brave new world’ was read like a futuristic science fiction novel where mankind would be transformed into a genetically engineered world of automatons.

With the advent of the genome and the mapping of the DNA, this novel is much less a futuristic prophecy and much more a potential reality as we move into the 21st century.

‘Brave new world’ was Huxley’s most famous novel and was inspired by the H. G. Wells’ novel Men Like Gods. Wells’ had a more optimistic vision of the future and this book gave Huxley the idea to write a parody of it which became ‘Brave new world’. He referred to it as his “negative utopia” or dystopia.

Huxley’s 1932 novel was set in the London of AD 2540 but the future has arrived sooner than expected with developments in reproductive technology, biological engineering, and sleep-learning that have already begun to have their effects on modern society. A follow-up novel by the same author titled Island was later adapted into the modern film starring Ewen MacGregor and Scarlett Johansen.

In ‘Brave new world’, Huxley presents a humanity that lives in a healthy, carefree and technologically advanced society. Science, art and religion, however, have been sacrificed through government-provided drugs and conditioning.

The ‘Brave new world’ is also largely hedonistic such that the genetically engineered members of society get their pleasure from drug use and promiscuous sex. The drug use ‘soma’ is a psychotropic synthetic that is dolled out by the government to escape bad memories and pain through hallucination.

Our modern age is more than just the mass production of automobiles and radios that Huxley witnessed but an age of the internet and a pornographic industry that has literally taken over the internet itself. It’s no wonder that Huxley doesn’t roll over in his grave as his ‘Brave new world’ is much closer than we ever realized only two decades ago.