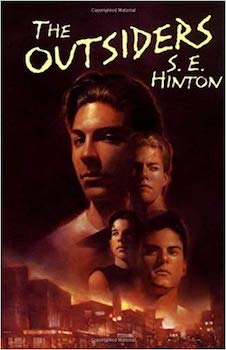 The Outsiders, by S. E. Hinton, was first published in 1967 and the author was only 15 when she began writing it. She published at 18 and the rest is history.

Francis Ford Coppola eventually adapted this spectacular novel into a major motion picture and the beauty of the novel is not lost in the screen version.

Readership has only increased over the years as this small book, originally meant for teens, has now gone on to attract millions of adults as a timeless classic.

‘The outsiders’ tells the story of ‘Ponyboy Curtis’, a fourteen-year-old who the reader immediately identifies with as a person of deep, heartfelt integrity. Ponyboy lives in troubled times of social class conflict as well as clinging to the brotherly love of his rival gang members known as the ‘Greasers’. The ‘Socs’ (pronounced ‘Soshes’ and short for ‘Socials’ are an upper-class group separated from the Greaser by economic and social status. Ponyboy comes from the less fortunate of the two gangs and is the story’s narrator himself.

As the novel begins, Ponyboy is leaving a movie theatre and is being followed by a red Corvair and a group of ill-intentioned Socs. The Socs follow him and attack just before he is saved by his brothers and rival gang members.

Dallas Winston is an older member of the gang who watches out for the younger Ponyboy and who agrees to accompany him to his next movie. At the drive-in, Dallas and Ponyboy meet another character ‘Cherry Valence’ who is associated with the upper-class gang of Socs and who takes a liking to Ponyboy. Cherry hopes to explain to Ponyboy that not all Socs are bad and the story develops such that various members of each side are pitted against each other in extremely difficult situations.

As a result of an accidental killing, Ponyboy and his best friend Johnny are forced to leave town and hide in a remote and abandoned countryside church away from the police. During this time, the boys bond with each other and discover that they both have a deep respect and appreciation for the beautiful things in life. The story intensifies when the church is discovered to have caught fire and several young children are trapped inside.

‘The outsiders’ has extremely developed themes of brotherly love and class conflict which are pitted against the poetic expression of earlier classics like ‘Gone With the Wind’.

‘Nothing gold can stay’ is the phrase adopted from a Robert Frost poem and meant to express the deep appreciation of things experienced when a person is young. As a novel made for teens, ‘The outsiders’ ‘Stays gold’ and is highly recommended as one of the greatest American classics of all time.

The outsiders by S. E. Hinton