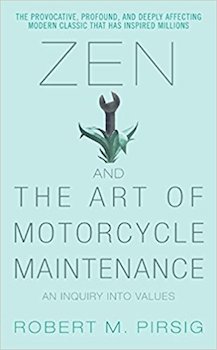 Zen and the art of motorcycle maintenance: An inquiry into values is the Introductory course for all spiritually inclined individuals. Robert M. Pirsig’s book explores the Metaphysics of ‘quality’ and leads the spiritually curious student down the Easy Rider’s path to Buddhist Nothingness.

This great novel first came out in 1974 and describes a 17-day motorcycle journey across the US. The author and his son Chris are on a journey which is mystically aligned with a greater theme about higher consciousness.

This book sold millions of copies and has been translated into twenty-seven different languages. It has been described by various critics as “the most widely read philosophy book, ever.” Having first been rejected by 121 publishers, the Guinness Book of World Records now distinguishes it as the most rejected bestseller of all time.

The introduction starts with a refreshing statement by the author himself. Despite the title of the book and the word ‘Zen’, Robert Pirsig explains “it should in no way be associated with that great body of factual information relating to orthodox Zen Buddhist practice. It’s not very factual on motorcycles, either.”

The appeal of this book is that it brings such great philosophical questions into a context of a true life story. The reader can literally feel himself along for the motorcycle ride while simultaneously exploring the meaning and concepts surrounding “quality”.

Joining Pirsig on his journey are the Sutherlands who represent a romantic attitude toward the world. It becomes apparent that Pirsig thoroughly appreciates both viewpoints and is aiming for the ‘middle ground’ of Buddhist thought. He is capable of seeing the beauty of technology rather than criticizing it and he demonstrates that motorcycle maintenance can be either enjoyable and pleasurable or difficult and tedious. It all depends on your attitude which will certainly change after reading ‘Zen and the art of motorcycle maintenance’.

Zen and the art of motorcycle maintenance: An inquiry into values by Robert M. Pirsig