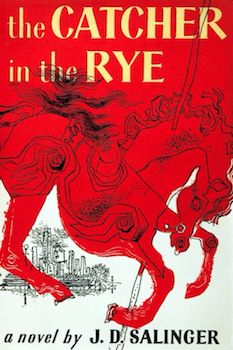 Banned in the US for many years because of its profanity and liberal portrayal of teenage angst and sexuality, ‘The catcher in the rye’ was eventually chosen as one of the world’s 100 best novels by Time magazine.

The author, J.D. Salinger, retired to a remote island and lived as a recluse for the remaining decades of his life and his novel eventually became a common staple of high school and college curricula throughout the world.

Mark David Chapman, who assassinated John Lennon, was carrying the book when he was arrested immediately after the murder and, adding to the intrigue, John Hinckley, Jr., who also attempted to assassinate President Ronald Reagan in 1981 was reported to have been obsessed with the book.

As many aging dissidents now know, the story begins with the main character and narrator, Holden Caulfield, who has now become an icon of teenage rebellion. ‘The catcher in the rye’ follows Holden through New York City after he is expelled from his college prep school. He is a tall, skinny and highly critical teenager who suffers from depression and qualifies his somewhat skewed perceptions early on in the story when he says “I’ll just tell you about this madman stuff that happened to me around last Christmas just before I got pretty run-down and had to come here and take it easy.” The story unravels from there to detail Holden’s experiences with his former professor, his younger sister, Phoebe and others.

It is primarily Holden’s negative attitude about life which creates the strange and mystical appeal for this book. Holden’s perceptions can actually serve as a release valve for teenage feelings of alienation and confusion that are basically the standard perception in so many young people today.

Although Holden’s attitude is the same at the end as it was in the beginning of the book, there is an optimism at the end which suggests that “teenage alienation is just a passing phase.”

Between 1961 and 1982, ‘The catcher in the rye’ was the most censored book in high schools and libraries in the United States. The challenges generally begin with vulgar language, sexual references, blasphemy, undermining of family values and moral codes, encouragement of rebellion and promotion of drinking, smoking, lying, and promiscuity.

Celebrities including Marlon Brando, Jack Nicholson and Leonardo DiCaprio have all made efforts to make a film adaptation to no avail. In an interview with Premiere magazine, John Cusack made the notable comment that his one regret about turning 21 was that he had become too old to play Holden Caulfield!

The catcher in the rye by J.D. Salinger