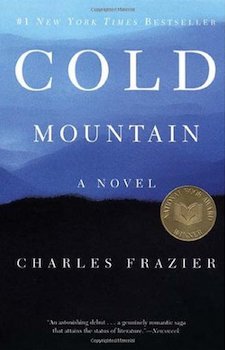 A seeming nobody professor, Charles Frazier, from North Carolina State University sat down and began writing his first novel in the early 1990’s.

By 1997, he had a major bestseller that would soon become a major motion picture starring Nicole Kidman, Jude Law and Renee Zellwegger.

To make matters even more amazing, this book is ten times what the movie is and the movie is not too shabby itself!

The novel won the 1997 National Book Award and the W.D. Weatherford Award that same year. The film was nominated for seven Academy Awards and won the Oscar for Best Supporting Actress Renée Zellweger.

Cold Mountain tells the story of a wounded deserter from the Confederate army near the end of the American Civil War. He walks for months to return to the love of his life Ada.

The novel alternates chapter-by-chapter between Inman’s and Ada’s stories who are separated by war. The style and use of vocabulary in the novel is exquisite and sets a tone of a dreamy, mystical journey home. Inman faces hunger, armed robbery and uses cunning ingenuity to forage food through the winter trek.

Ada is a minister’s daughter who was forced to relocate from Charleston to a farm in the rural community of Cold Mountain. The two lovers only knew each other for a brief time before Inman departed for the war but the hope of Inman to see Ada again is what drives him to desert the army. He then begins the dangerous journey back to Cold Mountain in the name of love.

As the story progresses, we are returned again and again to Cold Mountain. The farm that the gentle and dainty Ada lives on has been reduced to disrepair which brings in the supporting character Ruby who was played by Zellwegger in the film.

She is a larger than life character in the novel just as in the film and her resourcefulness soon saves the day through hard labour eventually learned by Ada. Early reviewers compared this plot and tone to the acclaimed novel Snow Falling on Cedars and it went on to win numerous other awards besides those already mentioned. Cold Mountain is modern day literature at its best and will lull you into a beautiful tale of romance and intrigue that you will definitely enjoy.