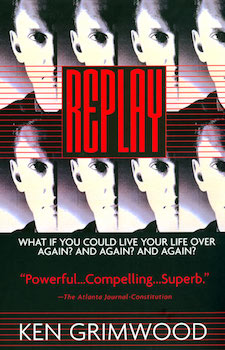 Replay is a novel by Ken Grimwood that won the 1988 World Fantasy Award and often gets misjudged by its cover.

The book had an influence on Harold Ramis’ who eventually made the comedy-drama Groundhog Day with Bill Murray and it also won numerous other awards such as being included on The Hundred Best Novels of Modern Fantasy List, the Locus Reader’s Poll as Best Science Fiction Novel and Aurel Guillemette’s The Best in Science Fiction 1993 award.

The story is an account of 43-year-old man who dies of a heart attack in 1988 and awakens many years earlier into his younger days in 1963. Jeff suddenly exists in his 18-year-old body as a college student at his old school Emory University. He then begins to relive his life with all his previous memories of the next 25 years and is able o predict many things which will happen including the assassination of JFK and other notable sports milestones.

Using his knowledge to profit, Jeff finds that he has entered some kind of strange but lucky opportunity which, like the movie Groundhog Day, soon becomes a sort of living nightmare from which he cannot awaken.

Unlike the movie Groundhog Day, this novel explores th possibilities of reliving one’s life over and over again with numerous different scenarios which are longterm rather than part of a single day. There are similarities, however, in that Jeff falls in love.

His scenario is different, however, as Pamela is also experiencing the replay effect just like he is. Convinced that they are soul mates, they attempt to overcome the complications which arise when they notice that their successive lives or ‘replays’ are getting shorter and shorter. As future replays become shorter and shorter, the two are left to wonder how things will eventually unfold — whether or not the replays will ultimately end, and the pair will pass into the afterlife — or if the current replay is, in fact, the last. Caught in an endless loop of lifetimes, the author creates characters who are penetrating and deeply moving.

Publishers Weekly reviewed this book and said, “Grimwood has transcended genre with this carefully observed, literate and original story. Jeff’s knowledge soon becomes as much a curse as a blessing.”

This is a book which becomes very hard to put down as the place where it ultimately leads us is into the darkness of our own mortality and the true meaning of what it means to live for the moment. Replay is definitely a searching novel of human potential and is worth a second look if the cover first turns you away. Replay this one in your mind before you put it back on the shelf!