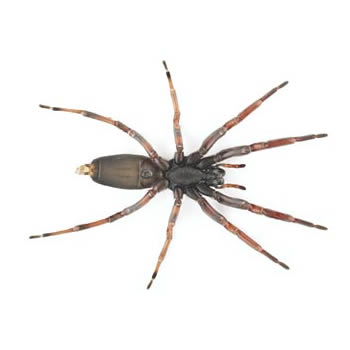 White-tailed spiders are reported to be biting Kiwis.

There have been reports in the press of incidents around the country and specifically in Palmerston North of people ending up in hospital after being bitten by white-tailed spiders.

TV3’s Campbell Live of 17th November featured some ‘facts’ on white-tailed spiders but made little effort to advise on how to get rid of them and keep them away.

The white-tailed spider is a native of Australia (why are so many of our pests Aussies?). They probably arrived here first about 100 years ago and found the conditions to their liking. White-tailed spiders are predators of other spiders, particularly the grey house spider which is also Australian. They don’t weave a web to catch prey, they actively seek out other spiders and stalk them down. They produce silk in a tangle as a nest, which is often found in warm dark places around the house.

White-tailed spiders produce a venom that they use to paralyse their prey by injecting it via their fangs. These fangs are such that the spider can bite humans. That they do bite humans is not in dispute. However, the seriousness of the bite is still controversial. It is accepted that the bite is as painful as a bee sting but there are many people that report more serious reactions including stiffness, headaches and swelling. There also many reports of ulceration and necrosis possibly caused by infection of the bite either directly from the spider fangs or subsequently from scratching of the wound.

White-tailed spiders do not seek to bite us, but will defend themselves if they feel under threat. They hunt mostly during the night and hide in dark nooks and crannies during the day. They are often found amongst the folds of clothing, curtains, bed linen, in shoes and other places where we may innocently place our hands or feet. The spider’s natural reaction to this invasion of ‘their’ space is to bite, and we suffer the consequences.

Get rid of white-tailed spiders

With a little effort, it is possible to eradicate white-tailed spiders and other spiders from your home and keep them at bay.

Your roof void is a likely place for these spiders to nest and hide during the day. A bug bomb like the Kiwicare NO Bugs released in the roof void will permeate through the area and kill the spiders and their prey.

Then treat the interior of the house with a residual surface spray containing deltamethrin or permethrin such as NO Bugs Super or NO Spiders. These are safe synthetic pyrethroid insecticides and kill insects and spiders that cross the treated surfaces. Spray the nooks and crannies around the house. Pay attention to the instructions on the product. Spray skirtings, back of wardrobes, under beds, around windows etc. Also, treat areas where other spiders are seen. If you can remove other spiders there will be no food for white-tailed spiders and no reason for them to come into your home.

Finally, it may be worthwhile spraying around the outside of the house. Concentrate on the eaves and bases of walls and places where there are dark crevices to hide such as wood piles.

Do these things and you can stay free of the fear of spiders and their bites.